Napier in 1873. A triangle of flat land between the sea the swamp and the island hill. Another triangle of land, north of the hill, is laced with small lagoons. The hill itself has spectacular views of the sea, plains and mountains.

Napier Beach on a misty morning. The Magistrates Court (today the Conservation Building) is at the left foreground. This became the temporary morgue during the earthquake. 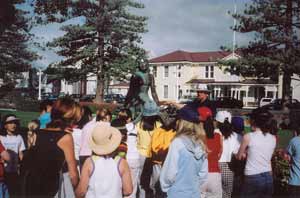 On tour looking at “Pania of the Reef” with the Conservation Building (125 years old) in the background.

“Pania of the Reef” being unveiled. 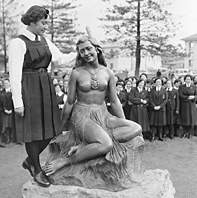 The Masonic Hotel 1932 - 1933 has always been the focal point of Napier. Bold clean pergola, its veranda another Mediterranean feature. See the speed lines and the writing in art deco format. The unusual design has the first story loggia built over the street. This was a first for New Zealand. On the northern side it has an ornamented pediment, its design is similar to the form of  the radiator of an old car.

Hotel Central. This building has the best plaster work of any building in the city. The octagonally arched balconies, Egyptian motifs and sun bursts, mouldings of each arch have been flattened and covered with geometrical patterns. Right across the top of the building is the zig zag chevron motif. This occurs over and over in art deco buildings all over the world.

The Daily Telegraph. The first building to be painted in 1990's to enhance the art deco designs; sunbursts, zig zags, fountains, and zigarettes.  All these are art deco design motifs.